Home » Parenting » When 2 Became 3 – Life With A Newborn
Parenting

When 2 Became 3 – Life With A Newborn 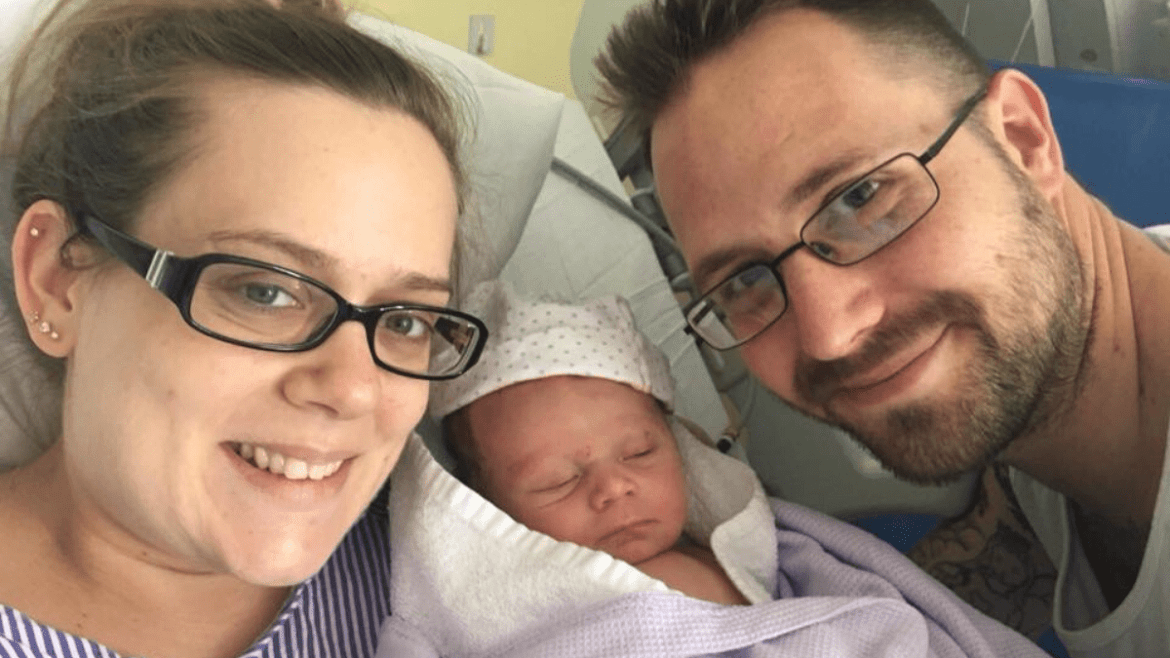 People always say, ‘oh, you forgot about the pain of childbirth’. No. I don’t think I’ll ever forget that pain.

Those first moments after birth

I do remember the exact moment that he was born. This tiny little pink bundle was thrust onto my chest and we just looked at each other, blinking, both a bit shell shocked I think. He had been back to back and refused to come out so they’d had to use forceps to get him out.

As we were staring at each other, I was waiting for that moment. You know the moment where you get that unbelievable rush of love for that tiny human that you grew and just birthed. But I’ll be completely honest with you, I didn’t get it right then (just to be clear, I do absolutely love the socks off the little monkey!)

Before I knew it, he had been whisked away again, to be cleaned up and checked over. I couldn’t wait to hear that first cry. But it didn’t come. It felt like we waited an eternity but he didn’t cry. I remember asking Daz over and over, is he okay, is he okay? He was absolutely fine, but in all of the photos of this time, our little one looked thoroughly pissed off. I think I would too though if I had just been pulled out of my nice, snuggly warm home of 9 months!

Me and Baby J were taken to another ward to be checked over and I attempted to breastfeed him. He would not latch though and so I spent a lovely half an hour with a midwife with my boobs out trying our hardest to extract some liquid gold colostrum. Who said mum life wasn’t glamorous?!

Left alone with the baby

Daz had decided that he would go home that night so that he could shower and get a good nights sleep, ready for the next day. I remember being pretty annoyed actually! I had just been through this pretty major thing of GIVING BIRTH, not sleeping and in some serious pain still and he wants to leave me. Alone. With a newborn child, that I’ll be honest, I was scared of. I was so terrified of doing something wrong, holding him incorrectly, hurting him accidentally, not knowing what he wants. But off Daz went, leaving me and Little J. To be fair, I can’t blame him really. He hadn’t had any sleep for about 3 days and hadn’t showered in that time either as there were no facilities there for dads. He also wouldn’t have an actual bed to sleep in. So, yeah, I guess I understand. A bit.

Even though I was so, so tired I was terrified of falling asleep. What if something happened to him in the night? He might stop breathing? Someone might steal him? I couldn’t risk it. Obviously, I did end up dozing off a few times but would wake up with a jolt and instantly check the cot to make sure he was okay. I think I checked every 3 minutes or so that he was still breathing.

Baby J had hardly eaten since he’d been born so I’d been trying and trying to get some milk in him. I was still trying breastfeeding and we’d also tried him on a bottle but he just was not interested. The experts say to do lots of skin to skin contact and this will soothe baby and encourage breastfeeding. I did not enjoy the skin to skin, mainly because we were in the middle of a heatwave in July and the hospital must have been 1,000°. We would just both end up in a sweaty, sticky mess.

The next night we were still in hospital and I was just trying to feed Baby J again when he vomited this clear, mucous type liquid everywhere. In an absolute panic, I called the midwives, convinced that there was something terribly wrong with him. The midwives reassured me that this was normal for a newborn. He was just getting the last of the stuff off of his lungs from being in the womb. I couldn’t relax though, what if this happened and I was asleep and he choked on it?

That night, I tried so hard to stay awake but I dozed off and the next thing I know I can hear him being sick! I picked him up quickly and called the midwives again in floods of tears. At that moment I had no idea how I was going to do this. How was I going to be a mum? How could I keep this incredible little miracle alive? I would never sleep again.

The next morning I had managed to pick myself up and made it my mission to get Baby J feeding. We finally managed it with the help of nipple shields and we were allowed home!!

Going home with a newborn

Once me, Daz and Baby J were home I wasn’t sure what to do. We put him in his Moses basket and sat down. What do we do? I needed to unpack my hospital bag so off I went to do that but all of a sudden I was hit with waves of emotions. I had packed this bag when I was pregnant and now here I am unpacking, with my baby downstairs with my husband.

Due to Baby J not eating much, he hadn’t had many wet nappies so the hospital had told us to keep an eye on it, and if he didn’t have a wee, to give them a call. Well, when we checked his nappy and saw that he had done a wee me and Daz just burst into tears and hugged each other. I had never been so happy for someone having a wee! I think we were both a bit emotional and drained.

The first few weeks at home with a newborn

Those first few weeks with Baby J are a blur. A lovely, emotional, crazy blur. I remember in that first week, it would take us all day to eat one meal and to have a shower. At 11 pm we would sit down, exhausted. How did people normally cope with a newborn?? How could people have more than one child? Would this ever get easier? Would I ever be able to have anything that resembles a normal life ever again? Yes, is the answer, but it didn’t feel it at the time.

What happens to your body after giving birth

Now, what made those early weeks more fun was the great things that happened to my body after childbirth. Some I had expected, some no one told me about.

For the complete list of what to expect, make sure you check out my post What Happens To Your Body After Giving Birth.

To help with the healing process of everything, my midwife had suggested that I take a bath as opposed to shower. Alright, no problem. No, it was a big problem for one little person. Baby J could be fully asleep and settled but as soon as I touched that water he’d be awake and screaming. It was from this that we found out he was a rock head. Daz would play him ‘Walk’ by the Foo Fighters and dance around the living room and Baby J would settle. That song still calms him down now.

Life with a newborn is a learning curve

Things definitely got easier and we were soon able to eat and shower like normal people. And just when you start to get the hang of this parenting malarkey, something will happen to make you realise that actually, you don’t have a clue what you’re doing. But believe me, every tired, worn out, difficult, stressful, emotional second of this journey it so totally worth it. I honestly would go through the pain of labour every single day for that little man.

It would be interesting to hear other people’s experience/thoughts of life with a newborn so if you want to, please leave a comment! ☺️

Anxiety – How it has affected me all of my life

Aahh this post is beautiful ❤️💙 just read the 3 previous ones and it was so lovely to read about how Baby J came to be 😊
I’m sure there are a lot of women who understand what you’re going through and sympathise for you in those early days!
Thanks for being so real! Xoxoxo

Honestly, I enjoyed reading your story about life with newborn. Another honest secrete I am disclosing here that We both ( my wife and me ) read this story together, I read it loudly so that she could listen.
We don’t have the baby till the date, but we feel your emotions!

Thank you so much for your lovely comment! It definitely was an emotional time! ❤️

My First Ever Night Away From Little J!!

How To Tell That You Are Ready For...

The Worst Day Of My Life

Who asked your opinion?

Expectation Vs Reality of Becoming a Mum